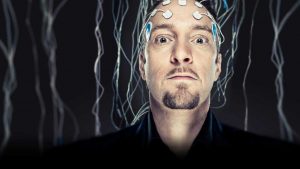 Key information about Derren Brown: he is a mysterious man with an even more mysterious beard to match. When he is not scaring the living daylights out of badly dressed art students, sticking self-adhesive pads to his head in a vain attempt to experience some American’s dream, or trying to shoot himself in the head, he like to paints (and no prizes for guessing) slightly freaky portraits of celebrities.

Derren hasn’t sold his soul to the Devil, as he would have you believe, instead he has sold it to Channel Four and has to date made 10 series – Mind Control, Trick of The Mind, Trick or Treat Investigates, The Experiments and The Events, 12 one-off specials – Russian Roulette, Séance, Messiah, The Gathering, The Heist, The System, Hero at 30,000 feet, Miracles for Sale, Apocalypse, Fear and Faith, Great Art Robbery and Pushed to the Edge, and has been touring since 2003 with his 7 sell-out stage shows which have had stints in the West End.

Does Derren have a middle name?
On Derren’s DVD, Inside You Mind, he says “This is a DVD of me, DVB”. The V is thought to stand for Victor.

What colour eyes has he got?
General consensus is that he has brown(ish) eyes.

Did he go to university?
He went to Bristol University to study Law and German where he gained a 2.1, though he has been quoted as saying “I didn’t want to be a lawyer… or a German!”

Does Derren have a girlfriend?
Derren very quietly came out in 2007.

Who or what is Figaro?
Figaro is Derren’s beloved pet parrot, but is being babysat in a sanctuary while Derren has to be away from home.

Is it true Derren likes taxidermy?
Yes, he says “…it’s great: it freaks people out, people never return to your house and it wards off any unwanted sexual attention.” He has a pet cat called Spasm which is a piece of taxidermy. Check out the Photos section to see a picture of Spasm.

Can Derren dance?
Derren was ranked in the top ten student dancers in the country in the category of ballroom dancing. If anyone would like to see Derren in action, so to speak, then check out the extras section of his DVD and see the ‘amusing’ reaction of an old lady who Derren is trying to ‘mind read’. This is one clip not to miss just for he sheer comical value!”

How did Derren first start out?
He saw a hypnotist whilst he was at university and decided to learn about hypnotism. He also worked as a close-up magician for 10 years, but he said that he gained most pleasure from the psychology aspect of magic as the magic side leaves him rather cold. Derren has spent much time reading about psychology, and the rest, so they say, is history.

Is Derren psychic?
No. The techniques Derren uses may make him look psychic, but just remember his quote in Mind Control: “I control the conditions so my testers become my testees.”

Does Derren hypnotise his participants?
Although he was once a hypnotist, there are many different forms of hypnosis, such as waking hypnosis (waking suggestion) and somnambulistic hypnosis. There are ways of suggesting and manipulating thoughts without formally hypnotising people, so although Derren does not hypnotise people per se, he makes use hypnotic suggestive techniques. Martin S Taylor – who uses hypnotism without hypnosis – also works with Derren on some TV shows and the selection process. For an interesting podcast speed forward to 27:30 until 36:30.

Does Derren use stooges?
Of course not! Just think about it, no matter how much money Derren would pay the actors the tabloids would pay much more just to expose Derren. If he did use stooges then he would have been exposed long ago.

I want to write to Derren, how do I do so?
[email protected] Derren’s people will read this and will often reply very quickly. This is also the address for autograph requests. If you wish to use snail mail then the address is Derren Brown, c/o Michael Vine Associates, 29, Mount View Road, London N4 4SS., but email is preferred.

Does Derren have any another talents?
Derren paints fantastic caricatures of celebrities with a slight twist. To see some of his many paintings check out his official website or purchase his book Portraits. Check out the News section for further details as and when the become available.