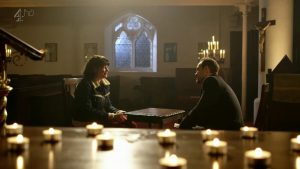 Fear and Faith focused on the placebo effect. In the first programme, Derren set up a fake pharmaceutical company, ‘Cicero Pharmaceutical Solutions’, which claimed to have developed a drug named ‘Rumyodin’, which inhibited fear. In actual fact the pill was a placebo made of sugar. The placebo effect, amplified by the convincing façade of Cicero, helped most of the subjects of the fake clinical trial of Rumyodin overcome their fears. It is shown that Derren repeated the experiment with separate groups, to each of whom it was claimed Rumyodin had different beneficial effects, such as smoking cessation and allergy relief, again with positive results. By the end of the programme Derren revealed that ‘Rumyodin’ was an anagram of ‘your mind’.

In the second programme, Derren examined the psychology of religious belief. Reproducing a number of well-known psychology experiments, he showed how non-believers can be susceptible to suggestions of a supernatural or religious nature. Subjects left alone in completely dark crypt report feeling a presence and seeing ghostly images. Subjects scoring their own performance in a test behaved more honestly when it was suggested there could be a supernatural presence in the room with them. Over the course of the programme he conducted a “Conversion Experience”, whereby using purely psychological techniques he induced an apparent religious experience in Natalie, one of the subjects from the earlier experiments, a self-identified atheist.

Fear and Faith isn’t currently available on All 4 but you can purchase it on Amazon Video.