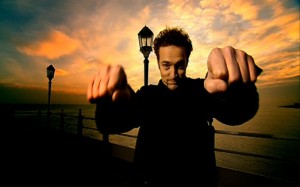 Derren’s lucky break came when in 1999 when Jerry Sadowitz’s manager, Michael Vine, (now Derren’s manager) flew up from London to see one Jerry’s performances in Glasgow. Michael happened to mention that for about two years he and his business partner, Andrew O’Connor, had been looking for a mind reader that they could introduce to Channel Four. Jerry mentioned Derren, and so on 27th December, 2000 Derren Brown: Mind Control I hit the screens and changed the face and perception of British magic forever.

Such was the success of the first programme, another two specials were commissioned and were subsequently broadcast on 25th August 2001 and 1st January 2002. Then some additional material was added to some of the original effects featured in the Specials to created a six part Mind Control Series. The repeat showing of Derren Brown: Mind Control is rated in Channel 4’s top ten most watched shows .

Derren Brown: Mind Control is available on Channel 4’s All 4 On Demand service.

Alternatively you can buy the DVD Inside Your Mind which contains tricks from Mind Control, or view via Amazon Video.