Trick of the Mind 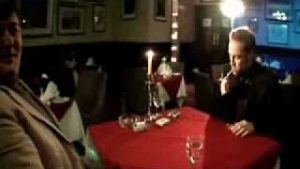 Derren Brown and Stephen Fry – Trick of the Mind

After embarking on a national tour and a three week run in the West End, Derren’s new six part series Trick of the Mind started on the 23rd April, 2004 and larger and more adventurous effects were achieved which once again showed Derren’s unique talent. The series featured a range of effects including Derren manipulating an orchestra to play a tune of his choice, playing chess with nine leading British chess masters and convincing a film student he has become invisible. Stephen Fry, Martin Kemp and Michel Roux Jnr. also feature in some of Derren’s effects.

Derren’s second series of Trick of the Mind comprised of six thirty-minute episodes and began broadcast from April, 2005. Each episode featured a ‘celebrity face’ and it was evident more money had been spent on its production.

Trick of the Mind is available on Channel 4’s All 4 On Demand service.

Alternatively you can buy the DVDs or stream it on Amazon Video.