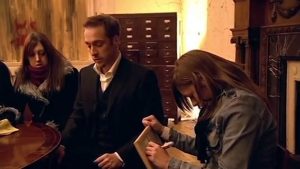 Derren again showed how people are easily manipulated by creating a séance which was shown on 31st May 2004.

Derren Brown brought together 12 members of the public to re-create a seance to challenge some of the most prevalent myths of spiritualism.

Séance received more than 700 complaints, mainly prebroadcast, which made Seance the most complained about television show in Britain at the time.

Derren Brown: Séance is available on Channel 4’s All 4 On Demand service.

Alternatively you can buy the DVD.